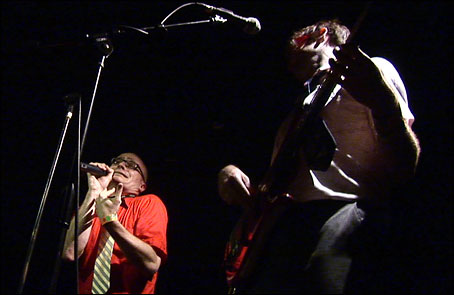 NEW YORK – The nerds are in the hoouusse!

On a steaming Saturday, a horn-rimmed posse of software engineers, computer programmers and support technicians was grooving at a most unlikely spot — a fierce underground music venue here. The act: MC Chris — king of the burgeoning world of “nerdcore rap” — who dropped rhymes like Jay-Z with a pocket protector, Eminem with complexion issues. See the full article from the Washington Post here.

Chambers says whilst blogging is “cool” and podcasts are “nice”, the real growth story in web 2.0 is its use as a business productivity tool. “The ability to virtually be in the same room wherever you are around the world – and share the same data, the same voice and video fixed and mobile… then tie it all together in a simple, one click to use ability.” See the Vlog here

A satirical video on teenage affluence is influencing hearts and minds through YouTube. See the video on Launch News Page or read the full article here.

Among the nightmares that might plague a marketing executive, bankrolling an event that some call the Genocide Olympics could well be one of the worst. But that’s just what the likes of Adidas, Coca-Cola (KO), General Electric (GE), Johnson & Johnson (JNJ), Kodak, McDonald’s (MCD), Samsung, Visa, and others are facing. As Beijing prepares for the Summer Games in August, 2008, activists around the world are planning to take China to task over issues ranging from the Dalai Lama to Darfur. And the multinationals that have coughed up tens of millions of dollars to sponsor the Olympics are caught in a public relations bind. Read the full article from Business Week here

Unilever has commited to adopting a global guideline that will stop the future use of size zero models or actors in its advertising. And it will also restrict its marketing and advertising to children between 6 to 11 years of age to the healthier foods and beverage products in its portfolio. Unilever will not impose strict criteria for models’ and actors’ Body Mass Index (BMI), but all brand directors and agencies will be expected to use BMI of between 18.5 and 25 as a guideline. This range is in line United Nations guidance of what level of BMI can be considered healthy. Read the full article here

Internet addresses ending in “.asia” will be open to governments and trademark owners starting in October, with general registrations coming in 2008. The initial round, which starts October 9, is limited to governments desiring geographical names such as “china.asia” and those with trademarks applied before March 16, 2004, and actively in use. Read the full article from Businessweek here

by launch-admin Jul 10, 2007 0 Uncategorized
Social media marketing, social media optimization, social bookmarking, social networking, social, social, SOCIAL. It’s everywhere and yet, many people are still having a hard time understanding exactly what the heck we’re talking about. So, if you’re still trying to figure out what the heck a social network is and why you might want to join one, here’s a brilliant two minute video primer.
Click on this link to watch the video
Page 4 of 8« First«...23456...»Last »