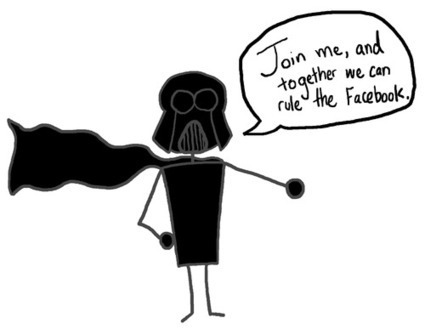 Nothing exists in a vacuum, and so it goes that everything is connected to one or a few other things. Once this is  taken into consideration, the common belief that social media sites (like Facebook and Twitter) are largely responsible for the increased traffic in many websites starts to get shaky.

While these sites have made significant contributions in the way people share information with each other and the world, it still pays to acknowledge that a lot of sharing was already happening before the advent of social media. The main difference being that this type of sharing (through emails, chat, and forums) was not as sophisticated and traceable as social media sharing is today. Still, it existed. And still, in a very influential way, it exists. These types of information sharing have been recently coined as “dark social.”

According to Alexis Madrigal, who wrote an article over at The Atlantic and coined the term, dark social refers to online sharing activity that cannot be easily tracked by web analytics. Dark social is those emails with links attached, chat messages from a friend, tweeted links, and bookmarked pages that you end up visiting much later (especially if you are the busy type). If word of mouth could have an online form, then it would most likely be dark social. For now, it seems to be the only type of online sharing that could capture and embody the sense of elusiveness and importance that word of mouth contributes to in the physical realm.

Since dark social is still a relatively recent hot topic, it is to be expected that there would be some discussion revolving around the term itself and how big its impact on web traffic actually is. Matt Owen from Econsultancy counters in his article “Dark Social: Attributing the Invisible” that usage of the term “dark social sounds a bit melodramatic” and opts instead for the term “direct traffic.”

With the change of term, the change of meaning was also, in quite a few ways, affected. Owen’s term primarily hinges on the idea that direct traffic is traffic stemming from bookmarked pages or from  a user typing an exact URL into a browser’s address bar. Madrigal mentions this, too; he just expounds on it and expands the scope with “dark social.” But even though slightly different in their interpretations, Madrigal and Owens still manage to conclude that dark social/direct traffic makes up the bulk of most traffic to websites and that it gets really tricky to track it when more channels are used to share information. Now that the existence of different terms for the same phenomenon has been clarified, from here on, we will continue to use the more popular term for this: dark social.

If dark social makes up the bulk of traffic to websites, how big is its actual share? As it turns out, it’s a jaw-droppingly big one. According to Madrigal at The Atlantic, dark social makes up 56.5% of the traffic (from social sharing) that the site gets. In comparison to that percentage, the various social media sites altogether only make up 43.5% of their traffic. The data plays even more in favour of dark social when the site variety is broadened to include web pages that are not as optimised for social media sharing, sites like The Atlantic (which are typically integrated with Facebook, Twitter, one other social media site, and the more traditional ways of sharing).

From Madrigal’s findings through the work of Chartbeat, a web analytics firm, it was found that on a broader type of website, dark social accounted for nearly 69% of all the traffic coming in, which is more than two-thirds of all traffic into those sites. The Chartbeat analytics data even concluded that from the analysed set of websites, social referrals from Facebook only made up 20% of the total. Twitter squeezed an even tinier share with only 6% of the total number of referrals. Even the data compiled by Matt Owens for “direct traffic” reflects a similar trend. Nearly 50% of the referrals, or in Owen’s vocabulary “conversions,” found on sites by analytics came from dark social. In comparison, social media referrals only accounted for about 17% of the data.

The existence of dark social adds another dimension to the knowledge of effectively optimising data for social sharing. For one, it implies that the content of a site still dictates in a large way the traffic that it will receive. The latest and best social media optimisations won’t necessarily make up for uninteresting content. We can no longer say that online sharing took off with the advent of social media, rather social media just gave a more public venue for the sharing of information, making it easier to search for and analyse.