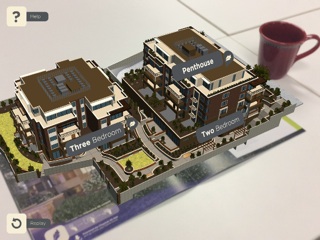 integrate the Australian property sector with the Internet of Things

The initiative, tagged to Caxton Property Group’s upcoming Chapman Green development based in the affluent Beecroft area in Sydney’s north, is the first roll out in the property sector for leading AR provider Blue Star Interactive, which launched in February 2014.

The project’s three separate AR experiences have been developed to give potential purchasers the opportunity to immerse themselves into the property in a virtual context prior to the structure’s completion.

Channelled through a Chapman 4D app, available for public download on iTunes and Google Play, the AR experience is accessed simply by pointing a smartphone or tablet at any Chapman Green 4D-activated image – which in this case includes onsite signage and a billboard at nearby Epping train station, along with brochures, press advertisements and other marketing collateral surrounding the project.

The user is then submerged in a 4D augmented and virtual world where select apartments can be interactively viewed with additional life-like sound effects engaging the viewer’s senses. The viewer can select from a range of typical apartments and be transported to their unit of choice to access authentic real-world balcony views from various property aspects. At the construction site, the property rises-up from the ground to appear at its real world size, in-situ.

Blue Star Interactive head, David Francis, commented that: “Our communications future is all about 4D, with AR being the first generation of immersive technology. As the only Australian company that offers an end-to-end augmented reality production solution, Blue Star Group is excited to be pioneering this technology in the property space.

“3D has long been claimed as a cinematic tool where viewing is enhanced through eyewear that slightly offsets your depth perception. 4D is another level, unbounded by screens. Using mobile devices – and wearables in the near future – 4D literally turns the world into a stage. We believe this technology will become a key component of the marketing plans for Australia’s leading developers and property marketers. AR is a particularly powerful tool for better informing remote or overseas buyers especially, as they can see a full 4D model of the project from their location.”

Aside from the transformational nature of how users interact with the marketing materials, AR will also provide valuable insights into users’ behavioural data. This includes information such as which apartments are being looked at, how long they looked at it for and the user’s geolocation. These metrics build essential records to aid in marketing efforts as new consumer areas of activity are defined.

Blue Star Group believe that stepping into AR technology offers a competitive edge into the promotion of future developments as it amplifies investor reach across global territories with a mobile virtual sales centre accessible from any location.

Blue Star Interactive has also built a proprietary iTunes and Google Play application called STELLAR that affordably allows any brand, of any size, to start to their 4D journey. Blue Star Interactive recommends the use of iPad Air for the best possible viewing experience.