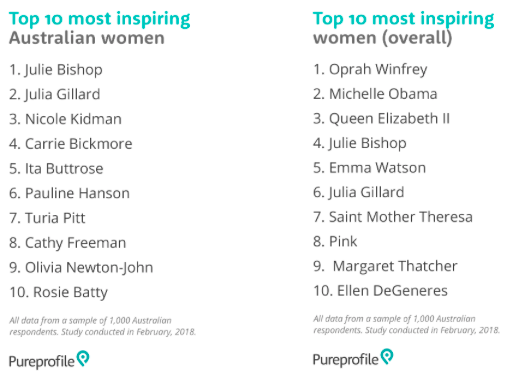 Oprah Winfrey number one overall, with politicians and women in media claiming the most votes

Australia, 8 March 2018 – Julie Bishop is the most inspirational Australian woman, according to a nationally representative study by global media and technology company Pureprofile, where 1,000 adults were each asked to name who in the public eye was their biggest female inspiration.

Julie Bishop sits fourth position overall – behind America’s Oprah Winfrey in first place and Michelle Obama in second, and Britain’s Queen Elizabeth II in third.
It’s clear that women working in, or linked to politics are making a huge impact on the public’s perception of what constitutes an inspirational woman. Julia Gillard, Hillary Clinton, Pauline Hanson and the late Margaret Thatcher also received some of the most frequent nominations.
Women working in the media as presenters, talk show hosts and journalists also made up the bulk of the top nominations, with Ellen DeGeneres, Carrie Bickmore and Ita Buttrose joining Oprah Winfrey within the top 20 most voted for names.
Within the performer sector, the top names the public offered as their most inspirational women were actresses Emma Watson, Nicole Kidman and Angelina Jolie, and singers Pink and Beyoncé. Those best known for humanitarian roles – Saint Mother Theresa and Turia Pitt – also featured within the top 20 list.
After 65 years on the throne – the longest reign of any British monarch – Queen Elizabeth II received enough votes to make the number three position, with fellow royal, the late Diana, Princess of Wales also making the top 20.
While taking the title of the number one most inspiring woman overall, Oprah Winfrey was particularly popular by those in the mid-age ranges, remaining unrivalled as the top vote by those aged 25-54. The younger audience (18-24 years) found slightly more inspiration from actress and UN ambassador, Emma Watson, while those age 55 and above were the highest-voting group for Queen Elizabeth II.
Despite accusations of tall poppy syndrome, it was clear that Australians are being inspired by Australians, with more local names present in the list than any other nationality.

All data from a sample of 1,000 Australian respondents. Study conducted by Pureprofile in February, 2018.

Pureprofile CEO, Nic Jones said: “The results around Australians most inspiring women have been eye opening and refreshing. There are no reality stars featuring high on the list, which is mainly headed up by strong, vocal women from politics and the media who are clearly making an impact and gaining respect for their work.
“You can see this reflected in the top inspiring performers who are well known for using their public platform to advocate for women’s rights. It’s also great to see Australia supporting its own, with so many Australian women featuring in the votes.”

About Pureprofile (ASX: PPL)Pureprofile Limited (ASX: PPL) connects brands with empowered consumers across the world by finding, understanding and engaging them through direct-to-consumer technology platforms. The Pureprofile group is now a global leader in data insights, programmatic media, big data, and quantitative research, as well as consumer lead generation through the recently acquired Cohort group. Pureprofile delivers next generation marketing solutions for more than 700 brands, publishers and research groups worldwide.